It was a cold, rainy, Autumn day when I arrived in Paris on October 15th, 2015. And it was absolutely perfect.  The clouds broke through as we descended on the outskirts of Paris and I was tense with anticipation from the long journey from New York through Iceland onward to France.  We landed at Charles de Gaulle airport and I nervously gathered my things as I prepared to step off the plane.  I was quickly greeted with the “Bienvenue en France” sign and the sound of French automated instructions over the loud speakers at the baggage claim area. I waited for my ride near the exit, looking for a kind gentleman by the name of Richard who was on staff with the organization I was set to volunteer with for a few weeks.  He found me in the airport and helped me with my 2 suitcases and 1 huge backpack, my whole life in 3 pieces of luggage.

We drove quite a ways to reach the village of Ozoir la Ferrière which is about 45 minutes from the center of Paris by train on the RER.  I enjoyed the scenery on that rainy day heading through the ancient French towns and admiring the architecture and small European vehicles and all the French signs.  It was like I woke up in a dream that day.  My host family was a British/American couple on staff with Agape France who had been in France for over 30 years.  Their little farmhouse cottage was located in the next village over, Liverdy-en-Brie, which was quaint and cozy, and just a minute walk to the town bakery which was literally the only boulangerie in this beautiful village surrounded by fields and flowers.  My favorite part of this village was what stood in the center. A century-old stone cathedral, poised with wisdom and grace in its old age, standing strong on the same foundation built so long ago.

The first day was spent acclimating to the new time zone, 7 hours ahead of my hometown in Tennessee. After much needed rest time, I joined my hosts for church the next day and their daily activities.  My first day volunteering in the office, I met the Agape France staff at the Office Headquarters. This is where I would be volunteering for the next 2 to 3 weeks.  The staff team was so friendly and welcoming and I was able to help with several administrative duties while I was there to do my volunteer work-exchange.  My host family was so sweet and accommodating and also helpful with tips on local travel and how to get around Paris.

By Day 3, I was prepared to head to Paris. I remembered my French class in college where my instructor made us learn navigation skills through the Paris metro and asking for directions.  Little did I know that 5 years later it would become necessary to navigate the huge Parisian train system myself!  It made me very aware and thankful for the little moments of synchronicity along my journey in the past which prepared me for the future.

On Saturday, October 17th, 2015 — I took my first venture into the city.  I took the RER train into the city all the way to the exit “Charles de Gaulle Étoile” where the famous L’Arc de Triomphe stands.  I anxiously stepped off the train, ascended the stairs and when I turned around, there it was.  The grand, monumental arch with 12 streets stemming from this one roundabout.  Busy traffic buzzing by as pedestrians stand underneath this giant monument.  I gasped with excitement as I took my first video and picture in the city.  I could see the top of the Eiffel Tower peeking over the city buildings from this location. I couldn’t believe I was finally here in this city I had dreamed of exploring for so many years.  My senses were fully alive to the sights and sounds around me.

From the L’Arc de Triomphe, I headed straight down the Champs-Élysées with my end destination being the Louvre Palace and Museum.  I walked cheerfully past prominent stores like Montblanc and Louis Vuitton, Cartier and more.  A man walking next to me hurriedly, obviously en route to somewhere, quickly asked me, “Excusez-moi, mademoiselle. Avez-vous l’heure?”  I smiled at him and a bit shocked that he so naturally spoke to me in French, apparently not knowing that I wasn’t a local.  I responded, “Oui! Oui, bien sûr (nervously, he was very handsome), “Il est neuf heures trente-quatre.”  I remembered the time exactly that morning because that moment was my first time speaking to a Parisian.  The young man thanked me with a, “Merci!  Bonne journée!”  (Thank you!  Have a great day!) 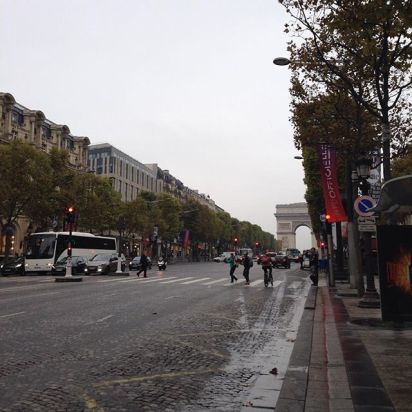 I arrived at a restaurant minutes later and feasted on my first Parisian breakfast that morning.  Croissants, jam, eggs, toast, fruit, coffee, and orange juice.  It was perfect.  I walked straight towards the Louvre after breakfast, passing monuments along the way and eventually arriving at the Les Jardins des Tuileries (The Tuileries Gardens approaching the Louvre Museum and Palace).  It was slightly raining, people leisurely sitting around the fountain in bistro chairs, umbrellas in hand, a sweet couple conversing.  The unstaged scene, yet picture-perfect; people enjoying the day fully.  It was real life and it was stunningly beautiful and romantic.  If there is such a thing as a perfect day, this was it.  I think the quintessence of life is made up of imperfectly perfect moments. Ralph Waldo Emerson said, “Write it on your heart that every day is the best day in the year…”   And with that notion, indeed, that day was the best day, a perfect day, and a day I will never forget… the day I first saw Paris with my own eyes.

My total of three weeks in Paris I spent wandering around the massive city, full of its own smaller districts, exploring and getting lost on purpose, wandering into cafés and restaurants, eating the most delicious food, meeting locals, drinking coffee and wine, smelling the cigarettes as I passed by the outdoor terrasses, and seeing all the sights I could.  It rained a lot in Autumn and I didn’t mind one bit. I found my favorite cafes and spots including Le Maraïs district with my favorite coffee shop Le Peleton Café.  I made friends there quickly and helped write a display on their store front window since they had just opened weeks prior.  I discovered my favorite restaurant near Pont Neuf, Ma Salle a Mangé, with the best Boeuf Bourgogne and Crème Brulée I had ever tasted.

I visited the Montmartre district and the Sacre-Coeur which was one of my favorite locations in the city.  One of my last days in Paris, I climbed the 300 stairs up and back down to get one of the best views of the city with La Tour Eiffel.  I posted on Facebook that day, November 1st, 2015:

If you want an amazing view of the city of Paris–it’s worth it to go to the top of the dome of the Sacré-Cœur. It’s cheaper (6€) and the view is one of the best in the city! I teared up because as I was climbing the 300 stairs of the dome I could hear the echo of the choir inside the Sacré-Cœur as they’re having mass. It was so beautiful I teared up. It was heavenly! What an amazing day in the city before heading to Lyon tomorrow. I’m grateful every day for this journey. Every moment and every blessing is counted. The challenges, the gifts, the joy– all of it is a gift. All of it is part of the adventure. The adventure of being alive and living every day to the fullest where ever you are in the world! ‪#‎joy‬ ‪#‎paris‬